Welcome to our third article in the “BD tips from the inside” series. This month, Elizabeth Petersen chatted to Shannon Percy about her experience with building a network and making business connections throughout her career, the majority of which she has spent overseas.

Shannon is a construction industry leader and change champion with more than 25 years of diverse experience in delivering complex, large scale construction projects around the globe. With a background in cost and construction management, she has recently returned to Australia from the United States where she worked in an advisory and program management role for various P3 public sector, tech and aviation sector clients. She currently resides in Melbourne.

A soft landing in Hong Kong

Elizabeth: Take me back to Hong Kong and your experience from there.

Shannon: In 2007 I left Australia to take up a role in Hong Kong, leading a team in delivering a $2.2 Bn mega project in Macau. I did not know anyone when I first arrived and relied on good fortune and serendipity rather than a planned approach to building my personal and professional network.

Hong Kong was a relatively soft landing as the Macau mega project known as ‘The City of Dreams’ was heavily reliant on imported resources from all around the world. Most of my new work colleagues, the designers and construction professionals, were in the same situation. We’d all descended on Hong Kong without our extended families and friends. With this common ground, networking within the massive project and in our new city seemed easy and enjoyable.

Elizabeth: I understand you spent the years following Hong Kong and Macau in various Asian locations also. Tell me about that and how you built and maintained your networks?

Shannon: That’s right. Following 5 years in Hong Kong and Macau and the completion of the project, many of my colleagues moved back to their home countries but just as many stayed in and around Asia, in Macau, Hong Kong or Singapore and with some venturing to the new frontiers of Ho Chi Minh City, Thailand and Jakarta. I lived in all of these countries over the next 7 years and these contacts proved invaluable in establishing professional networks as well as friendships whenever I have moved to a new city. In some respects, the new frontiers were ready-made for networking opportunities compared to the more developed expats cities. As minority English speakers, there were well-established Chambers of Commerce, charitable organizations, professional Meetup Groups and Sporting Clubs where ex-pats gather to discuss life and work and welcome newcomers. Joining and participating in these organizations, and the many events they held, were a great way to connect and expand my network.

For example, Ho Chi Minhs SpamCham (yes, named after the tinned ham) was an inclusive, eclectic mix of people, local and newcomers, from all industries living in Vietnam. And yes, there was a tin of SPAM presented at these meetings in recognition of various achievements.

Active participation in Professional Associations – a no brainer for networking

Elizabeth: Tell me more about the professional associations and professional bodies that you were involved with?

Shannon: I have been involved in the local branch of international associations and professional bodies and have held committee positions of the overseas chapters of both RICS and AIQS in Thailand, Indonesia and Vietnam. Part of my role included being the organizer of various chapter events as well as participating on assessment panels for new member applications. This proved to be a terrific way to build lasting connections with other members of these organizations. While in the United States, I mentored a fellow Australian based in Vancouver through the NAWIC mentoring program. As a founding member of Australia’s NAWIC organization, and a former Victorian Chapter Committee member, the opportunity to be involved in this program from abroad was particularly gratifying.

Women’s industry bodies in Jakarta as well as ‘Chief’, a private network for women leaders in the USA, were a game-changer. The comradery, support, advice, and business connections not only led to business collaboration but will continue to shape the next chapter of my career.

Elizabeth: What’s been your experience of networking in different locations?

Unfortunately, some targeted networking events seems to be motivated by ‘what business opportunities can I derive from talking to you?’ I like to think more in terms of ‘how can we collectively participate in the projects and professional organizations that shape our cities while working with people we like and admire’?

I have found that some of the most fruitful business connections have developed simply from enjoying each other’s company and getting to know the person on a personal level and finding common ground. This approach can sometimes be a slow burn. However, the longevity of these relationships is proof of this approach, rather than operating from a purely transactional mindset.

Shannon: In summary, I have been fortunate to develop a network of trusted friends, associates and colleagues in the construction industry spanning the globe, many of whom I met many years ago. I am extremely grateful for the advice and support extended to me as I have re-entered the Australian market.

That’s BD taken care of in only in only 3 billable increments! Most practitioners in professional services know that they have to do Business Development, 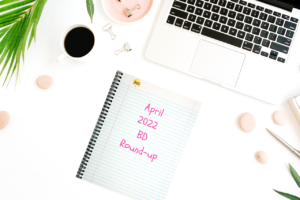 Welcome to the April 2022 BD Round-Up. It’s always good to be able to share some of the articles that have caught my attention over

Welcome to the March 2022 BD Round-Up.  I mentioned in the January Round-Up that the Year of the Tiger embodies courage, bravery, and strength –